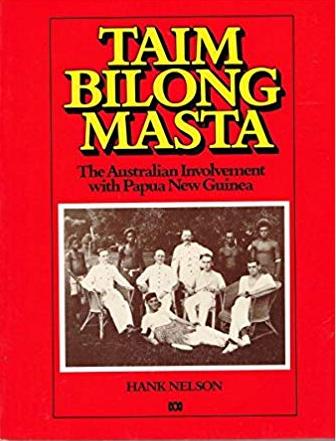 Long after I had left New Guinea and on one of my frequent business trips from Saudi Arabia back to Australia, I was killing a bit of time in the ABC Shop in Adelaide's Rundle Mall when I found a set of twenty-four audio cassettes labelled "TAIM BILONG MASTA - Australia's Involvement with Papua New Guinea".


Of course, I bought them right away and for years I listened to them over and over again as, in the absence of any proper television or radio reception in the world's biggest sandbox, they had become my daily nightcap to drown out the howling desert winds.


I believe the creator of those tapes, ABC presenter Tim Bowden, is still around but not so those twenty-four precious cassettes which over the years, just like myself, had become warped and worn. In later years, I did buy the book by the same name but there's nothing quite like listening to those old familiar voices and I had been searching high and low for those recordings but without success - until now!


A kindly soul, Kieran Nelson, who grew up in New Guinea, worked for the Papua New Guinea Banking Corporation (PNGBC) and now lives in Brisbane, undertook the enormous labour of love of putting all twenty-four cassettes onto youtube for our continued listening pleasure. Thank you, Kieran, and here are the tapes: click here (or here).

Episode 2 The Good Time Before

Episode 4 The Loneliness and the Glory

Episode 13 Into The Highlands

Episode 19 You Had To Be Firm

Episode 20 Across the Barriers

Episode 23 A Reason For Being There

P.S. ... and while I have your attention, I might as well give the 1950s feature film "Walk into Paradise" a much-deserved plug:

If the trailer whetted your appetite, then click here and lash out on this cinematic treat. At only $15 it's the best souvenir you're ever going to get from New Guinea.

or click here to view and print the brochure

If you are looking for a particular name, search here!